American Christianity is divided and in decline and there are no obvious, easy ways to fix what is broken, suggests journalist Bob Smietana in “Reorganized Religion: The Reshaping of the American Church and Why it Matters.”

Publisher’s Weekly called it “must-read for anyone invested in the fate of the American church” and “a superb examination of the future of Christian institutions.”

For places of worship, covid-19 has been a kick in the teeth. But it is the latest in a series of setbacks that have left many denominations reeling.

“Everything changed at the same time,” said Smietana, whose book was released on Tuesday.

The red-blue split is a problem. So are an aging Christian population and declining birth rates. Young people, on average, attend less often and give less generously, and they are less likely to adopt traditional views of human sexuality. They also have more options on Sunday mornings.

For many, the onslaught has been overwhelming.

For congregations, setbacks can feel personal, he noted.

This is especially true for those struggling with what Springtide Research executive director Josh Packard calls the Hamlet problem, Smietana said.

Like the dark Shakespearean figure, “These congregations and their leaders think they’re the star. They think what happens to them…a lot of it depends on the decisions they make and it’s all a spiritual thing,” said said Smietana.

As a result, setbacks feel like personal failures rather than inevitable challenges.

In reality, “you are not the star of the show. You are in a bigger drama, you are small players, and the drama is happening around you and you will be affected by all these other factors”, a- he declared. .

When a challenge comes along, “you have to adapt to it. That doesn’t mean it’s your fault,” he said. “You didn’t cause these things, but you have to deal with them.”

Smietana, a national reporter for Religion News Service, is a keen observer of American faith and a Christian himself.

He has worked as a senior news editor for Christianity Today, the leading evangelical monthly, and as a senior editor for Facts & Trends, a quarterly published by LifeWay Christian Resources of the Southern Baptist Convention.

For a time he was also a religious reporter at the (Nashville) Tennessean.

Sometimes being on the “Godbeat,” as it’s called, can be dangerous to one’s faith. William Lobdell, the LA Times award-winning religious reporter, entered office as a Bible-quoting evangelical and exited as an atheist, after years of covering sex abuse lawsuits and gospel preachers of prosperity centered on money.

Almost a quarter of a century after he began covering religion, Smietana is neither an apologist nor an apostate.

“Faith harms and heals. It separates us and unites us. It builds cathedrals and burns cities. It gives life and brings death,” he wrote.

“Asking if religion is good is like asking if music is good. Or food. Or politics. Or baseball or artwork or science or any other human activity. Religion is human. And that’s important,” he added.

Smietana emphasizes the sense of community that a place of worship can provide.

In his own life, he remembers how members of Grace Covenant Church, a small congregation on the North Side of Chicago, took him and his wife in when life was difficult and their marriage was strained.

He also shares how his faith community helped him cope with the sudden death of his brother, providing him with meals so he didn’t have to cook and frequent flyer miles to help his family get to places. funeral.

“What happened to my family happens every day in churches and religious communities of all kinds,” he wrote. “For all its faults – and they are legion – organized religion can be a source of good in the world. This good work is in danger right now.”

Nowadays, almost all Protestant groups are in numerical decline.

Church attendance plummeted at the start of the covid-19 public health emergency. In most places, in-person attendance remains well below pre-pandemic numbers.

In a chapter titled “They Don’t Love Us Anymore,” he interviews some of the people who stopped going to church in March 2020 and never came back. For many, he said, church is no longer “a natural part of the rhythm of their lives.”

In “Reorganized Religion”, Smietana argues that the decline of organized religion “will affect us all, no matter who we are or what we believe”.

The sense of community and belonging that accompanies membership in many religious organizations is important and difficult to replicate, he suggests.

He argues that organized religion “can and should be saved” and gives examples of congregations that have managed to thrive in difficult times.

In one case, a dying Seattle congregation, founded in 1953 by Swedish immigrants, voted “to give themselves sacrificially” to a newer, younger, and more diverse congregation known as the Quest, writes Smietana.

The post-merger church has thrived, with an average attendance of 753 in 2019.

In Smyrna, Tennessee, a dying, predominantly white Episcopal church took in a group of refugees from Burma. (Burma is often referred to as Myanmar, a name that military authorities adopted in 1989. Some nations, such as the United States and Britain, refused to adopt the name change.) Today, the anthems are sung in one of the commonly spoken Karen languages. in parts of this Asian nation.

As the nation becomes more diverse, churches that recognize and embrace these demographic shifts are more likely to succeed, he suggests.

Near the end of the book, Smietana warns of the dangers of division, quoting a Klingon verse from the gospel according to Star Trek: “Only a fool fights in a burning house.”

Unity is helpful, he notes, but is not always sufficient.

THE STRUGGLE OF SMALL CONGREGATIONS

While mega-churches are booming, tens of thousands of smaller congregations are struggling to stay alive.

Since joining the Godbeat in 1999, he’s seen the numbers steadily drop.

“The average size church when I started…reporting on religion, was 137 [weekly attendees] and now it’s 65,” Smietana said, citing data from the 2020 Faith Communities Today survey.

Near the end of his book, he praises Grace Covenant Church – and others like her – who have been a source of hope and healing over the years.

“I want to tell them that their work is not in vain,” he said.

Unfortunately, Grace Covenant Church will no longer be around when the book comes out in paperback. The congregation voted last month to close and held its last service on Sunday.

Smietana was present to say goodbye.

Religious journalist Bob Smietana has witnessed the decline of American churches since the turn of the 21st century. “The average sized church when I started…was 137 [weekly attendees] and now it’s 65,” he said, citing data from the 2020 Faith Communities Today survey. (Courtesy picture) 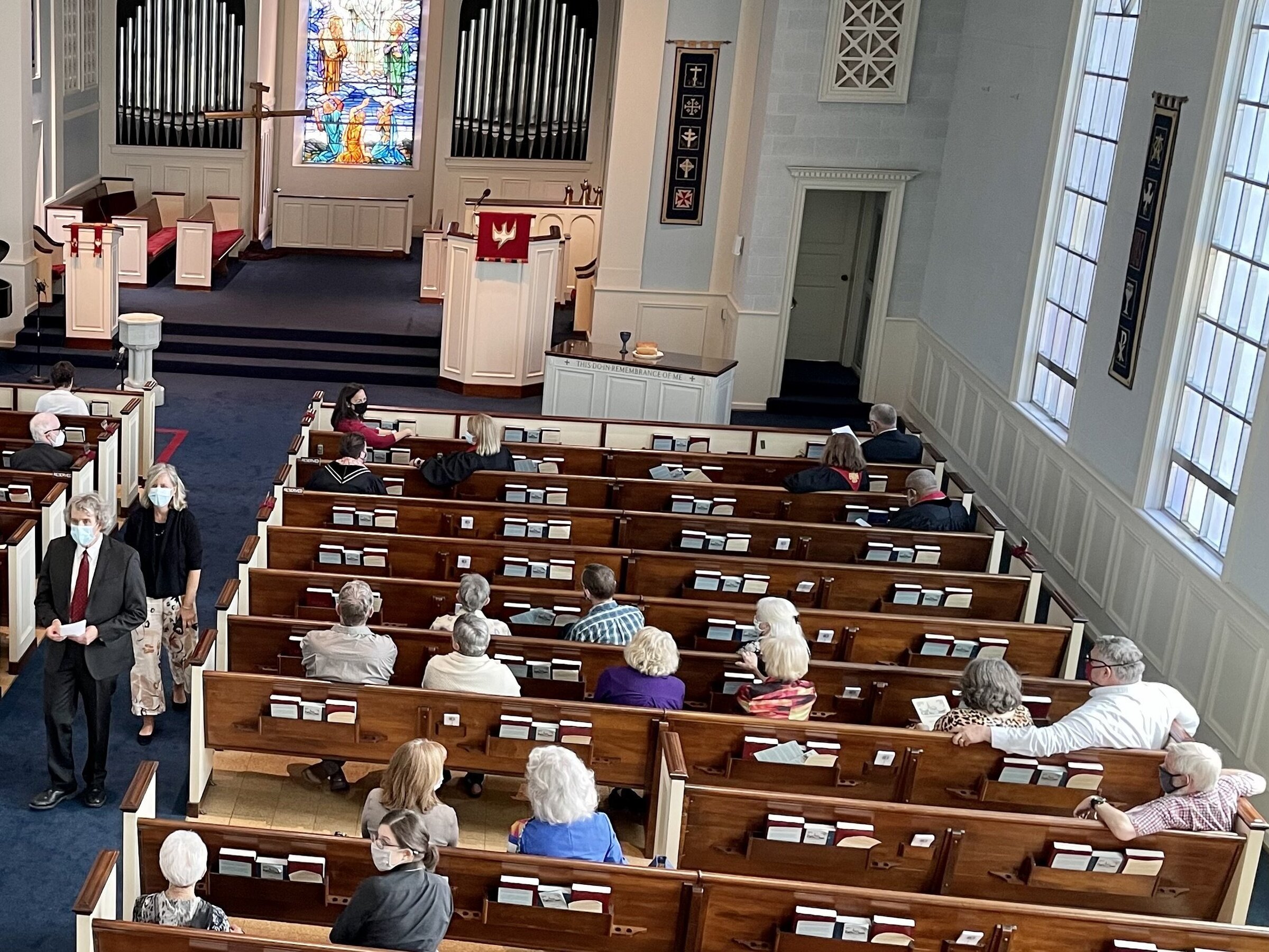 On a Sunday afternoon amid a pandemic, Pulaski Heights Presbyterian Church in Little Rock again drew dozens of worshipers for an ordination service in October. Nationally, attendance at most places of worship is down from pre-covid-19 levels. (Arkansas Democrat-Gazette/Frank E. Lockwood)