FLETCHER – The Henderson County Partnership for Economic Development welcomed back its first two CEOs and honored a Hendersonville engineering firm as Partner of the Year during its Building a Legacy celebration at Rinehart Racing in Fletcher last week. About 250 supporters were present.

“We were thrilled to have such a strong turnout,” said Steve Gwaltney, President of the Partnership. “The Partnership is known for creating exceptional events that build bonds in our community, which strengthens business and industry. The impact of manufacturing is lasting, and we were able to tell that story tonight.

In the past year alone, the Partnership announced the relocation of Rinehart Racing and the expansion of CanvasPrints.com, which brought over $11.5 million in investment and more than 95 jobs to the community. Both hailing from western North Carolina, the companies moved to Fletcher Business Park where they each occupy an iconic industrial building. 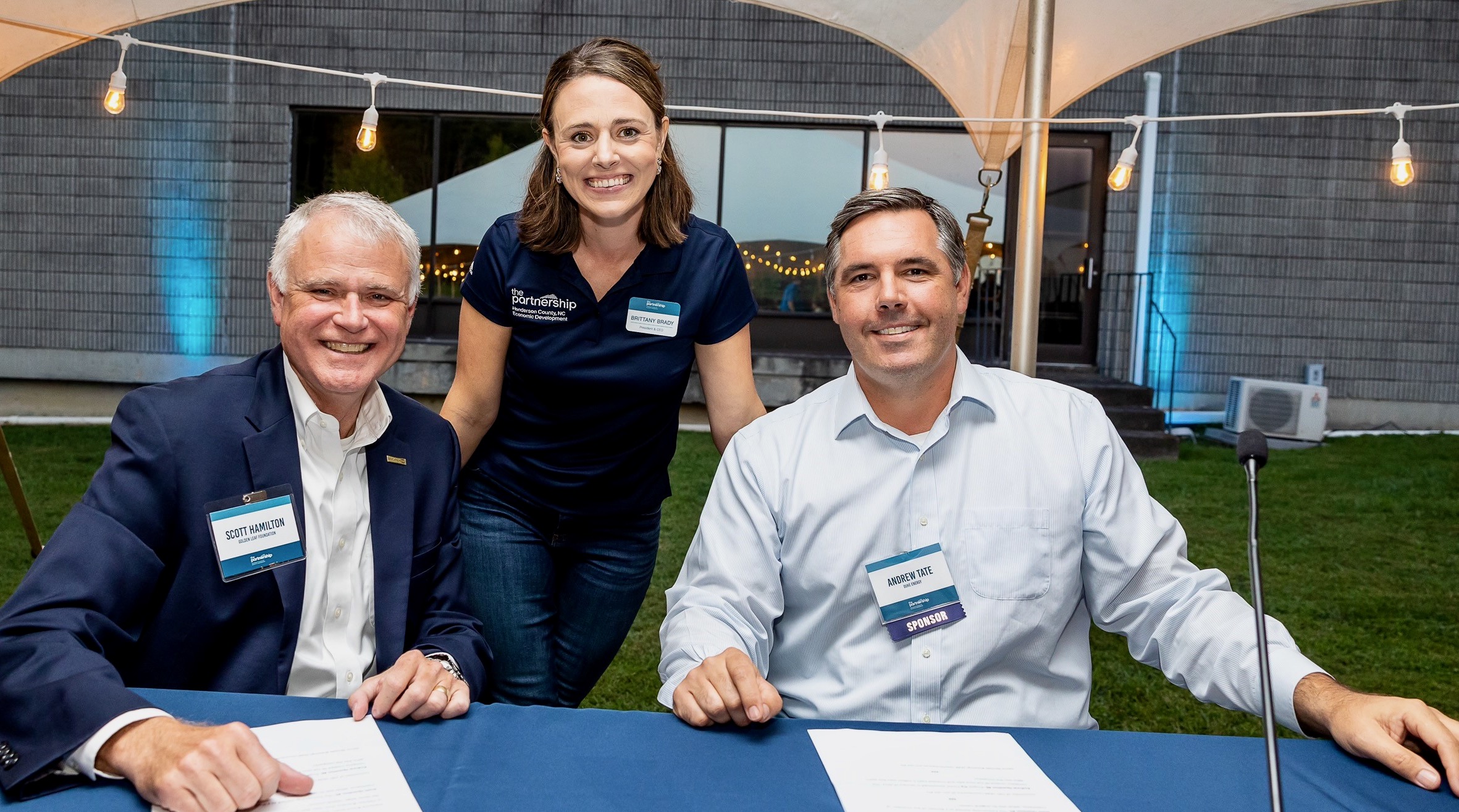 The partnership’s current CEO is flanked by Scott Hamilton, the agency’s first CEO, and Andrew Tate, its second.At last Thursday’s event, attendees toured Rinehart Racing and then enjoyed a reception and dinner on the lawn. After dinner, the teams participated in a quiz focused on economic development in Henderson County and hosted Scott Hamilton and Andrew Tate, HCPED’s first and second leaders who both served in economic development positions at the statewide.

“I always say I stand on the shoulders of Scott and Andrew,” said Brittany Brady, President and CEO of Partnership. “They have created such a strong foundation for economic development in our community, and it was an honor to see them celebrate with us tonight.”

Hamilton served as president when the Partnership began as a stand-alone organization in 2006. He is now president of the Golden LEAF Foundation, which focuses on disbursing tobacco fund settlement dollars.

Tate, who served as president of the partnership from 2007 to 2017 and led efforts to recruit the Sierra Nevada Brewing Co. in Mills River, is currently North Carolina’s director of economic development for Duke Energy Carolinas.

Duke Energy’s site preparation program assisted in the development of sites in Henderson County, Ferncliff Park and the Hudgens site on McMurray Road.

WGLA Engineering was honored as Partner of the Year.

“WGLA has been instrumental in the work of the Partnership and our sister organization, the Henderson County Economic Investment Fund,” said former board chair Nathan Kennedy. “Without their support and advice for the development of the site, we would not be where we are today. The entire team is humble and forward-thinking, and they are a tremendous asset to Henderson County.