Ford is now offering (much more than one) an electric police truck with the release of the F-150 Lightning Special Service Vehicle, or SSV, as the brand continues to expand its Ford Pro sub-brand.

Yesterday Ford unveiled its new SSV F150 Lightning Pro police truck in pre-production form, the first electric truck to be offered to law enforcement. This move should come as a surprise to some, as Ford has long been the automaker of choice for the boys in blue. By Ford’s admission, the brand already supplies more than 12,000 police stations in the United States alone and “sells more than all other police vehicles combined”. But this vehicle, while an incredible choice for police stations around the world, is part of Ford’s larger push to expand its commercial services and electric vehicle offerings.

It’s important to note first that due to the nature of police work, electric vehicles make perfect sense in almost any setting. The police have set limits that limit the distance they have to walk each day, they are often stationed in places where they just sit and watch areas, and they travel with a large amount of electrical equipment that need to be powered (laptops, outdoor mounted radars, surveillance, lighting, etc.) Electric vehicles perform these tasks perfectly while keeping running costs down and emissions down. 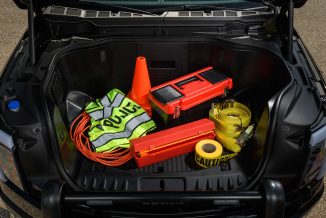 Pre-production model shown. Maximum payload varies and is dependent on accessories and vehicle configuration. See the label on the door jamb for the load capacity of a specific vehicle. 1 credit 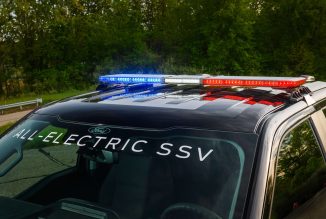 The Lightning SSV starts with a Lightning Pro model, the base Lightning model capable of an astonishing sub-four-second acceleration rate from 0-60 MPH, and gives it a series of upgrades. Many would think that would include the typical roof-mounted light show, front bumper protection and additional upholstered cloth front seats, but Ford offers much more than that.

Purchasing a Lightning SSV provides customers with access to the “Ford Pro Platform”, which is a collection of software, services and physical locations exclusive to the Ford Pro commercial sub-brand. The software offering seamlessly integrates EVs into the fleet management software that already helps manage ICE vehicles, but now, with the advantage of EVs, customers have access to an increased level of control and data; load/charge status, general condition of the vehicle, etc. are part of Ford’s E-Telematics software.

Customers can also visit one of 650 Ford Pro Service Centers which are commercially oriented, providing not only prompt service but also the sale of vehicles and charging infrastructure, while a personal concierge guides customers on how to assemble and equip their vehicle, how to integrate new electric vehicles, and much more.

With Ford’s heritage in the police industry, its established infrastructure, its software ready to integrate electric vehicles and its advantage of being early in the police space, align them well. However, Tesla, GM and Dodge have all made strides in the industry and there will no doubt be competition in electric vehicle offerings at police stations very soon.